The last few days have been spent supporting my girlfriend who was running the great North Run, so there hasnt been much time for Hobby fun. Half the elf cavalry have been cleaned up and based. I had originally cut away the supporting tabs under the front hoofs of the horses, but that has weakened the models considerably, so I've had to add some brass wire supports to each horse, which has taken quite a bit of time. Most of the other elf lancers are in the queue waiting to be paint stripped. 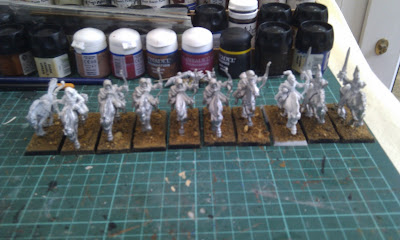 Im still on the lookout for an additional archer. I got outbid for one on ebay this weekend. The final bid was about £12. So I should probably insure the rest of my 30 cavalry!
Posted by Unknown at 9:07 am